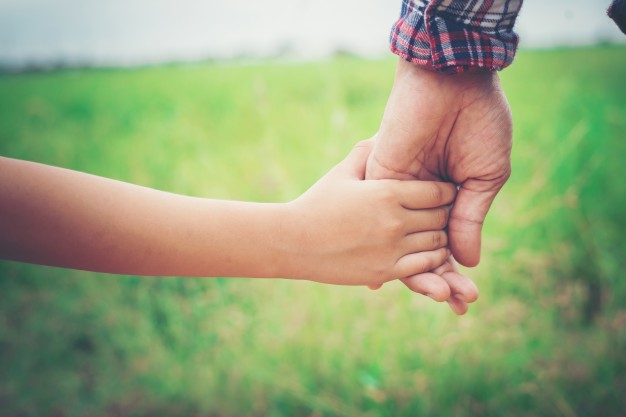 Today we celebrate Father’s Day by connecting with fathers and grandpas in ways that make us feel comforted, secure and with the familiar, like being at home. For me, as a little girl, my desire to seek a connection with my father was as strong as my wish to feel at home with him. Back then, a connection, inherent between a father and a daughter, eluded us. It was only after my father’s death, years later, when I realized there was a way I could be at home with him.

Air conditioning blasted through the vents in my father’s Cadillac. It was an early summer morning and my father and I were sweating from heat and humidity already in full bloom. I’d look at him and notice his breath labored and sweat bleeding through his shirt. He’d run a flat hand down the front of his shirt, wiping away wet spots and smoothing the ripples in the cotton. My father’s reddened face faded to small bursts of pink on his cheeks as the heat from inside the car cooled. He’d lift his eyeglasses off his face, pull a folded handkerchief from his back pocket and wipe his bald forehead. During this time, I yearned to fill the silence with talk, a chance at connecting.

My earliest memory of my father was when I was seven or eight when I went with him to run errands on Saturday mornings. We would park in the pharmacy lot in the center of town, walk to the dry cleaners, to the golf pro shop to see Brian, then to Deerfield State bank to make a deposit and then back to the parking lot. By the time we completed our to-do’s, we had made a circle.

On Sunday nights the wafts of popcorn intermingled with Camay soap while I was taking a bath, signaling it was time for me to hurry downstairs to the kitchen. I focused on the large pot of popcorn as my father shook it back and forth on the stove. He would then fill the different colored popcorn bowls to the rim, and then dribble butter and splash salt to crown the bumpy mound. I grabbed my designated colored bowl and headed to the den.

“Come, come here and sit with me,” he directed. I didn’t want to watch hockey on television. I wanted to sit on the couch and watch My Three Sons or play cards or Monopoly—with him. We remained quiet with our attention focused in different directions.

On weekday nights, my older brother and I were required to remain seated in the den until my father got home from work. He’d shuffle up to the master bathroom to wash up, replacing a work smell of stale office air, the day’s cigarettes, and starch from his wrinkled white button-down shirt with the odor of a very dry vodka martini and a freshly lit Tareyton. While seated in his brown leather chair, he peered through his bifocals at the TV Guide, look up at the TV, take a slurpy sip and then a drag from his cigarette. I waited for Dad to ask me anything. The conversation was a bridge, an offering, extending a hand to connect. Soon, it would be time for dinner.

After dinner, I would follow the muffled sounds of the big bands and descend the basement stairs, stopping midway to see my father sitting on a black stool surrounded by a drum set. I was sitting on the outside, looking in. He fingered the vinyl stack to select a record and then place the black disc on the player. Dad kept his head bowed in concentration, becoming one with the music as he picked up his drum sticks and then snapped his wrists to the music’s rhythm. My father never looked up. Eye contact would be an invitation to share what he had, to be a part of his life—a connection.  I focused on my Dad, he focused on his music. We stared at our objects of desire. The music stopped. He returned his drumsticks to their place on the record player stand. It was time for me to go upstairs.

My remaining memory was when I turned thirty, when my father had died. My brother and I were met by strange people in the airport, only to meet more strange people at the subsequent services. These were people my father knew, people who filled his life, and I knew none of them.

“Your dad was a very nice man, a good man, good to me,” his housekeeper said in a Southern whisper.

“How nice he was, with a sense of humor that was unexpected, ya know, dry,” another commented.

“He always helped at the church when he could,” a church usher said.

“We loved talking to him, so friendly,” said a neighbor.

I didn’t know who they were talking about.

We never could connect as father and daughter, but if I link all the scenes I could begin to know him. I could see his methodical way of running errands, his excitement in the simplest of things like popping corn, how music calmed what worried him and that he was friendly and had a sense of humor.

I close my eyes and remember the scenes of my father. They are the connections I once yearned for, and now are between us. 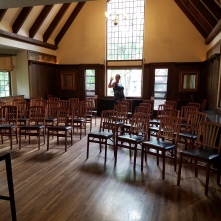